The NFT.Storage service provides a few ways to check on the status of an upload.

On the File listing page of the NFT.Storage site, you can see a list of things that you've uploaded to NFT.Storage. 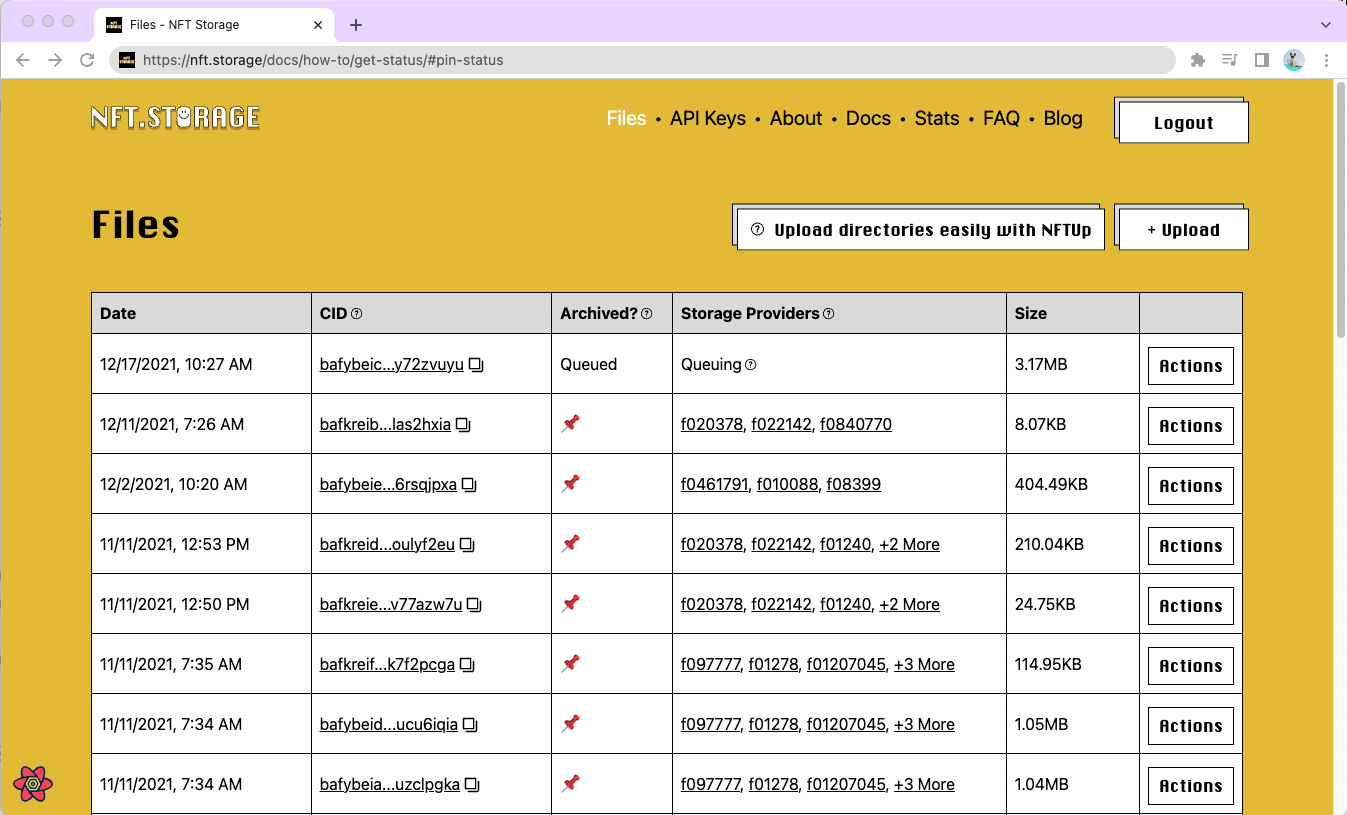 The table on the file listing page has two columns related to the current status of the data storage process, Pin Status, and Storage Providers.

The information in the file listing page is also available using the JavaScript client's check method, and via the HTTP API by sending a GET request to the /check/{cid} endpoint.

When you upload data to NFT.Storage, it is "pinned" to several IPFS clusters, which are groups of machines that coordinate to provide content-addressed data to the IPFS peer-to-peer network.

The Queuing status indicates that a request to pin the data has been submitted to a cluster node, and the node has added the request to a queue for pinning. Depending on how busy the cluster is, an upload may stay in the Queuing state for some time before transitioning to Pinned or Failed.

Note that you can retrieve your data using IPFS even while the status is Queuing. You can verify this by retrieving your data from an HTTP gateway. If you've uploaded a directory, try retrieving a sample of the files within the directory.

A Pinned status means that the cluster has successfully pinned the data.

A Failed status indicates that an operation failed while attempting to pin the data. Note that a Failed status may be temporary, as the cluster will continually retry Failed pins in the background and will update the status to Pinned if a retry attempt is successful.

In addition to automatic retries by the cluster, a Failed pin will change to Pinned if the same data is uploaded successfully in a subsequent request. As long as the CID is the same for both uploads, the original upload's status will be marked as Pinned after a small delay.

There are several reasons why an upload may end up in the Failed state.

If you are able to retrieve the data from IPFS, the cluster is likely waiting to retry a previous attempt and will soon pin the data.

If you uploaded your data directly to the NFT.Storage service using a client library, the HTTP API, or the Upload page on the website, a Failed status may indicate that one or more chunks of data was not recieved by the service. This may happen when uploading large files or directories containing many files and may be resolved by retrying the upload.

If your data was pinned using the Pinning Service API, a Failed status usually means that the cluster wasn't able to fetch the complete content over the IPFS peer-to-peer network. These issues can be hard to diagnose due to the many variables involved, especially when original source of the data may have an unreliable connection to the network or is behind a firewall. If the data is being provided by another pinning service such as Pinata, or if you've verified that the data is retrievable using IPFS (ideally from multiple distinct locations), please file an issue so we can look into the cause.

If you find that your file is retrievable but the pin status still says Failed, please file an issue with the relevant CIDs and we'll take a look.

The Storage Providers column on the file listing page shows information about the Filecoin storage providers that have committed to long-term storage deals for the uploaded data.

When data is first uploaded, the Storage Providers column will show a status of Queuing. This indicates that the NFT.Storage service has the data and is aggregating it into a format that can be used to make a storage deal.

Once enough data has been aggregated, the NFT.Storage service will propose several Filecoin storage deals with different Filecoin storage providers. These will initially be shown in a "pending" status, while the provider accepts the deal and posts its commitment to the Filecoin blockchain.

When using the HTTP API or client library to check the upload status, information about Filecoin storage is provided in the deals array field within the status response object. The deals array will be empty while the upload is in the Queuing state.

You can verify the status of your upload on the Filecoin blockchain at any time after the initial storage deals are made. Once a deal is active, you'll find links to the deal information in the Storage Providers column on the file listing page. These will take you to the Filfox block explorer, which shows details of every Filecoin message and transaction. You can also use the information from the JSON deals object described above to retrieve deal information using native Filecoin software like Lotus.